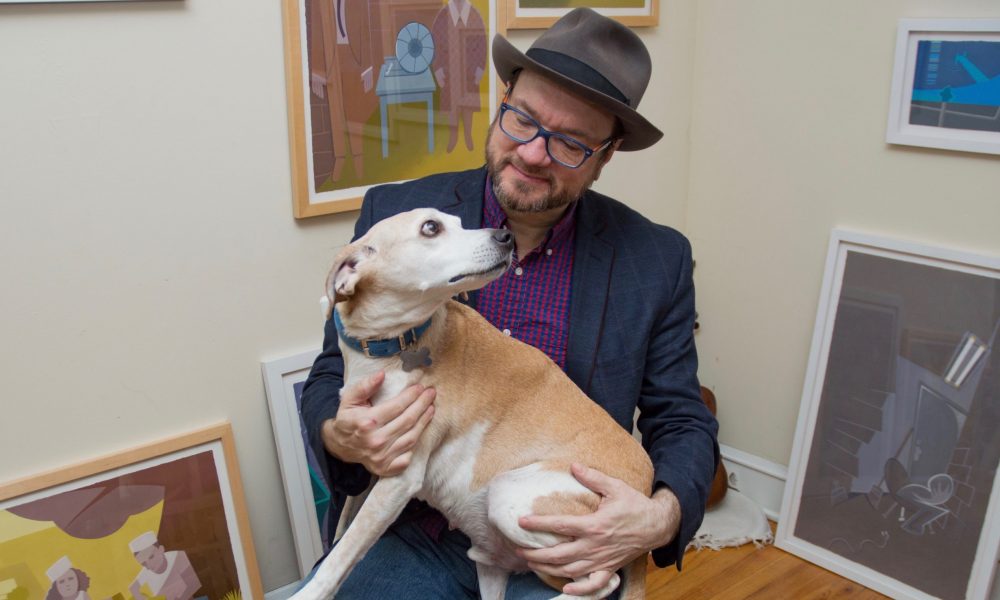 Today we’d like to introduce you to Steven Jones.

Steven, can you briefly walk us through your story – how you started and how you got to where you are today.
I’m an artist, writer, and musician who has made his living in various ways over the years, including as a case worker for homeless people, mural and set painter, pit band musician, and professor at Virginia Commonwealth University and the School of the Art Institute of Chicago. I’m a fine artist at heart and my truest work is made with little or no commercial considerations — as an expression of external and internal facets of myself.

I’m an exhibiting painter and write about music, art, and film for various publications. I play music when I can and combine a love for American roots music and punk and garage rock in a band called the Feckless Hayseeds which is currently on hiatus. I’m a committed political progressive married to a full-time economic justice activist. I’m gloriously impractical, follow my passions, have little head for business, but hope to better master the career and self-promotion game in order to get my work seen by larger audiences. I define success not in material terms but by inner growth.

I was born in Louisville, Kentucky. My father was a TV producer and choir director and my mother was a nurse and violinist. As a teenager I became involved in the Louisville underground music scene, playing in a post-punk band called Folks On Fire, then moved to Chicago to attend art school at SAIC. I studied painting, art history, performance art, and film and worked as an intern at Randolph Street Gallery — a vital Chicago venue in the ‘80s and ‘90s for cutting edge art. For seven years I worked as a performance artist in clubs and galleries. By day I did scenic painting and social work. I married Susan, my oldest friend and high school sweetheart, and we returned to Louisville so she could attend law school. She was an idealist who wanted to practice civil rights law. I planned to attend grad school after she passed the Bar exam.

We’re always bombarded by how great it is to pursue your passion, etc – but we’ve spoken with enough people to know that it’s not always easy. Overall, would you say things have been easy for you?
Not at all smooth, but the struggles profoundly impacted my life and work. After returning to Louisville, I lost my mother to cancer when she was just 55. Soon after my wife Susan became an attorney. We bought our first house intending to raise a family. The week we moved in she was diagnosed with Fourth Stage ovarian cancer. She underwent 13 cycles of largely ineffective chemotherapy while I cared for her 24/7. Two years to the day after my mother’s death, Susan died in my arms, age 34. Three of Mom’s sisters died during the same period.

It was a devastating experience. In my case, bereavement was exacerbated by clinical depression — a condition I’ve grappled with most of my life. I relocated to Richmond, Virginia where I struggled to regain my financial and emotional footing. I went broke and came close to suicide. Recovery began in earnest when I returned to school. I earned an MFA in painting and printmaking at VCU, started writing art criticism for publication, began exhibiting my work in Virginia and New York and Teaching College. I met a marvelous woman — a fellow Louisville native, also a writer and activist — named Catherine who eventually became my second wife. In 2007 I was hired to teach at SAIC and we relocated back to my adopted home town. We settled there and in 2014 bought a house in Hermosa — Logan Square’s younger sibling. This past year we converted part of our home into an art studio, freeing me to work full-time as an artist, writer, and househusband.

Losing my wife and family members led me to rethink my whole approach to art-making. I focused my energy on developing an art that was uniquely mine — visionary, deeply felt, and rooted in my own experience. I wanted to tell stories only I knew in a manner only I could tell them. I created an idiosyncratic visual style that combined elements of drawing, painting, and printmaking in multipart works. I drew on memories, dreams, family history and folklore for subject matter. I embraced qualities that were unfashionable in vanguard art — narrative, craft, and non-irony— but central to a personal ethos that values the individual and self-expression over hyper-intellectualism or art about art. The result is a kind of travelogue that navigates a dreamscape version of the Middle American neighborhood where I grew up and the past of my Kentucky ancestors, executed in a style that I’ve dubbed, half seriously, both Storybook Expressionism and Suburban Surrealism.

So, as you know, we’re impressed with Steven L Jones – tell our readers more, for example what you’re most proud of as a company and what sets you apart from others.
I make pictures — visually sophisticated, darkly comic, and psychologically dense. My work can be viewed on my website and a Facebook page where I document works-in-progress. In additional to my visual art-making, I regularly write about songs of life and death for Murder Ballad Monday — part of Sing Out!, the folk music journal. Some of my essays are cross-posted on Salon. Recurring themes in all my work are life and death, sex and God, humor and pathos, the numinous and uncanny, the sacred and profane. I think my work in both the visual and written realms is multi-layered, finely crafted, and intelligent but from the heart. I believe art has a healing function and should seek meaning by embracing intangible qualities like beauty, spirit, and the unconscious. In my view, too much contemporary art is cold, didactic, over-intellectual, and nihilistic in nature. I’m proud that my work is entirely mine and bucks these trends.

So, what’s next? Any big plans?
To make much more art, get it seen, and find gallery representation. To create a book about my work and launch a vlog from my new studio. To expand my writing markets, write more about film, and complete books on — among other things — Christmas, Halloween, and the art of the horror film. To revive the Feckless Hayseeds and busk on street corners and at “L” stations, as well as play cool venues like Schuba’s and The Hideout. To return to teaching — including, possibly, doing art classes for people in prison. To be a better friend, husband, and housekeeper. To better integrate my personal and professional lives. To keep depression at bay through creative activity, love and friendship, and by helping to de-stigmatize mental illness. To never lose my sense of humor. And to wring every bit of living — good, bad, and in-between — from life, facing it full-on, and emerge wiser and more compassionate for the experience. 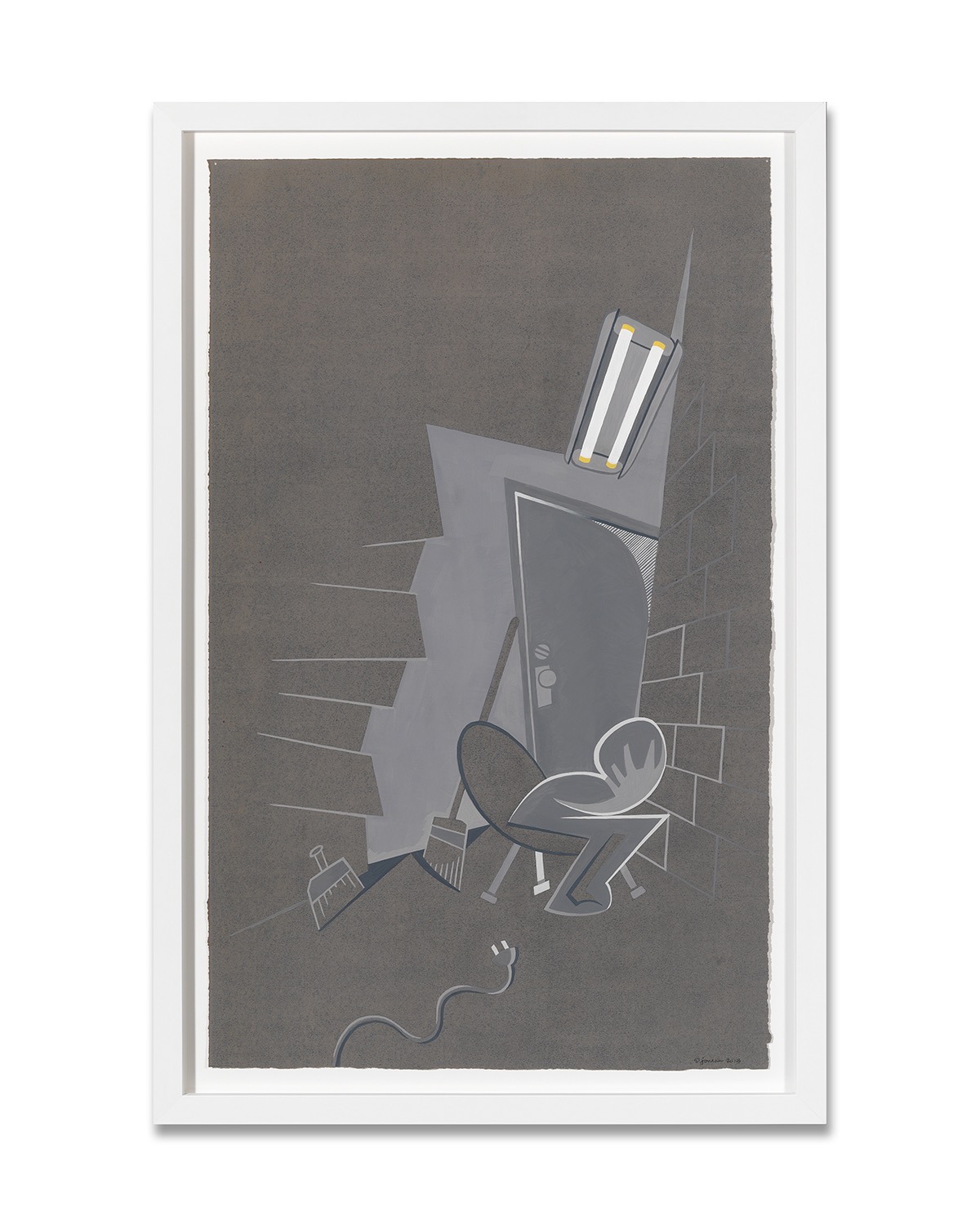 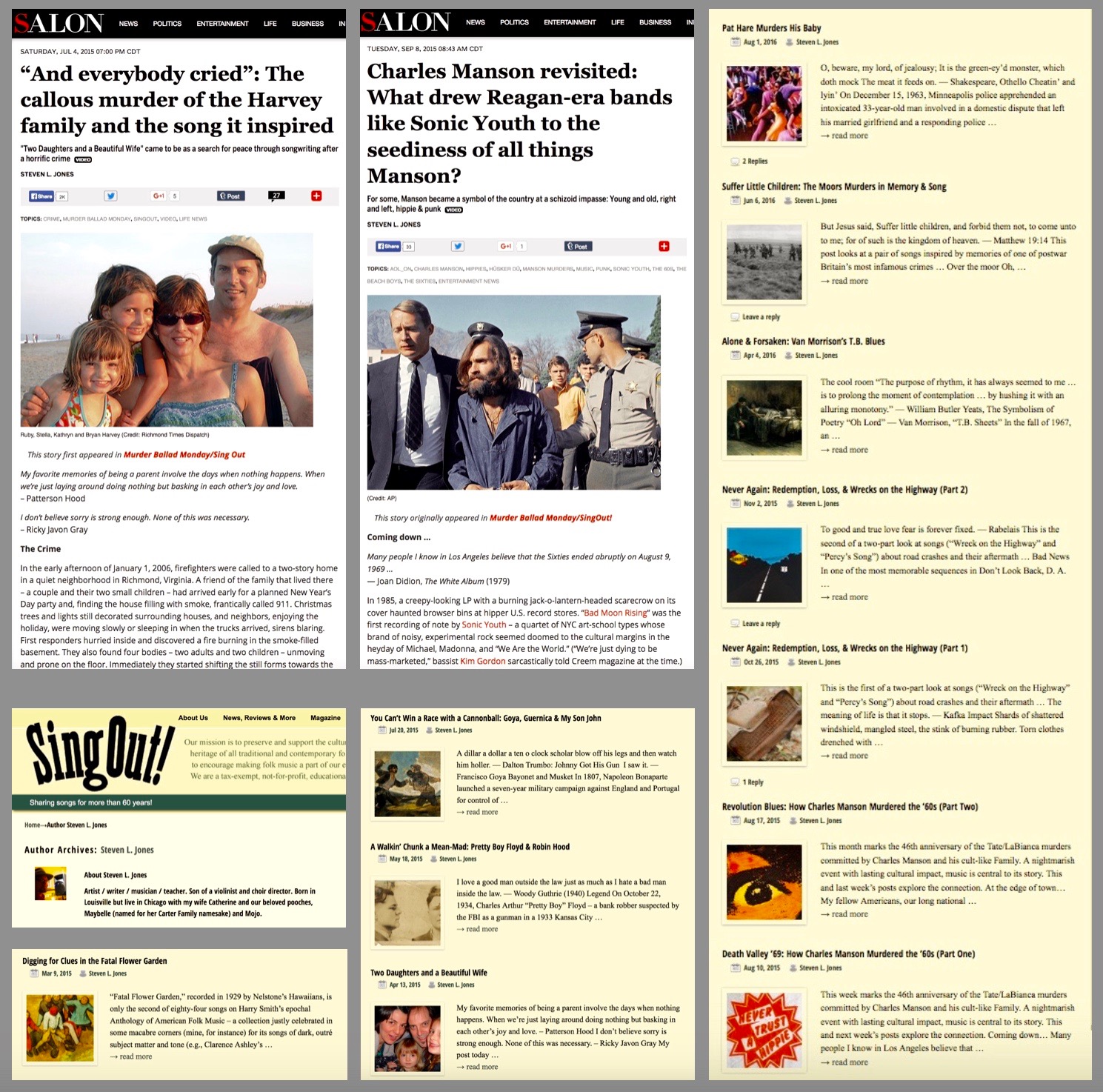 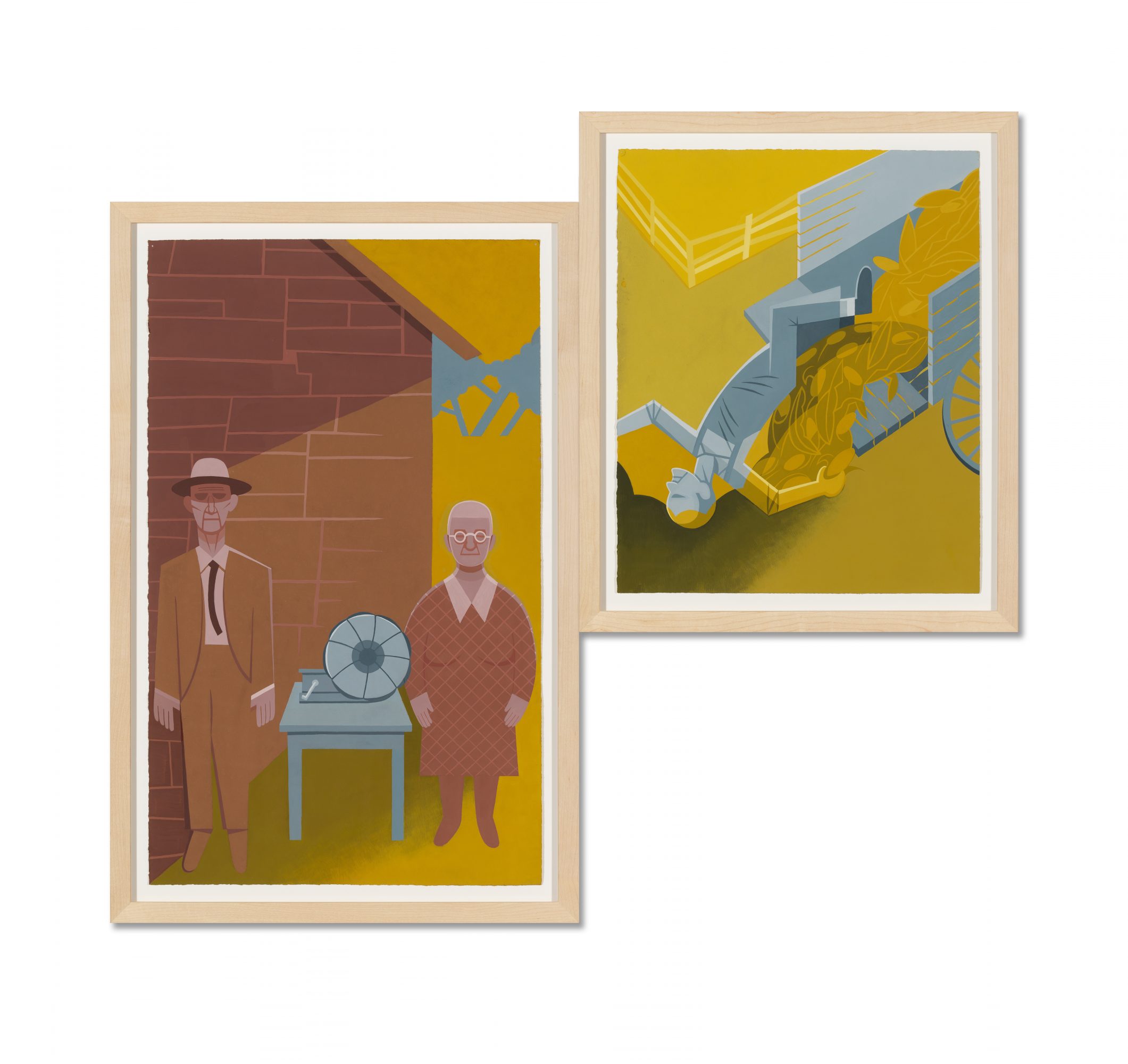 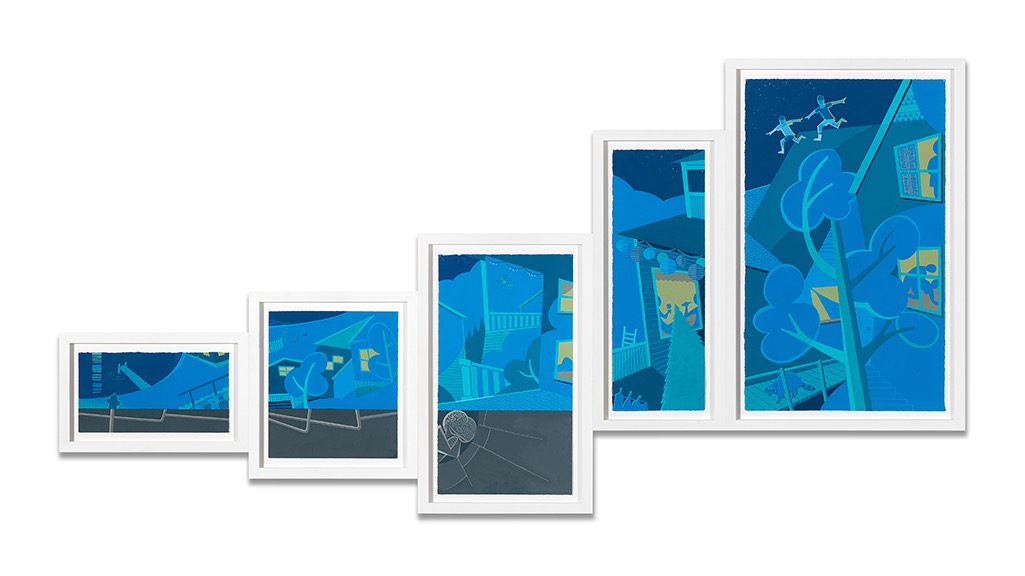 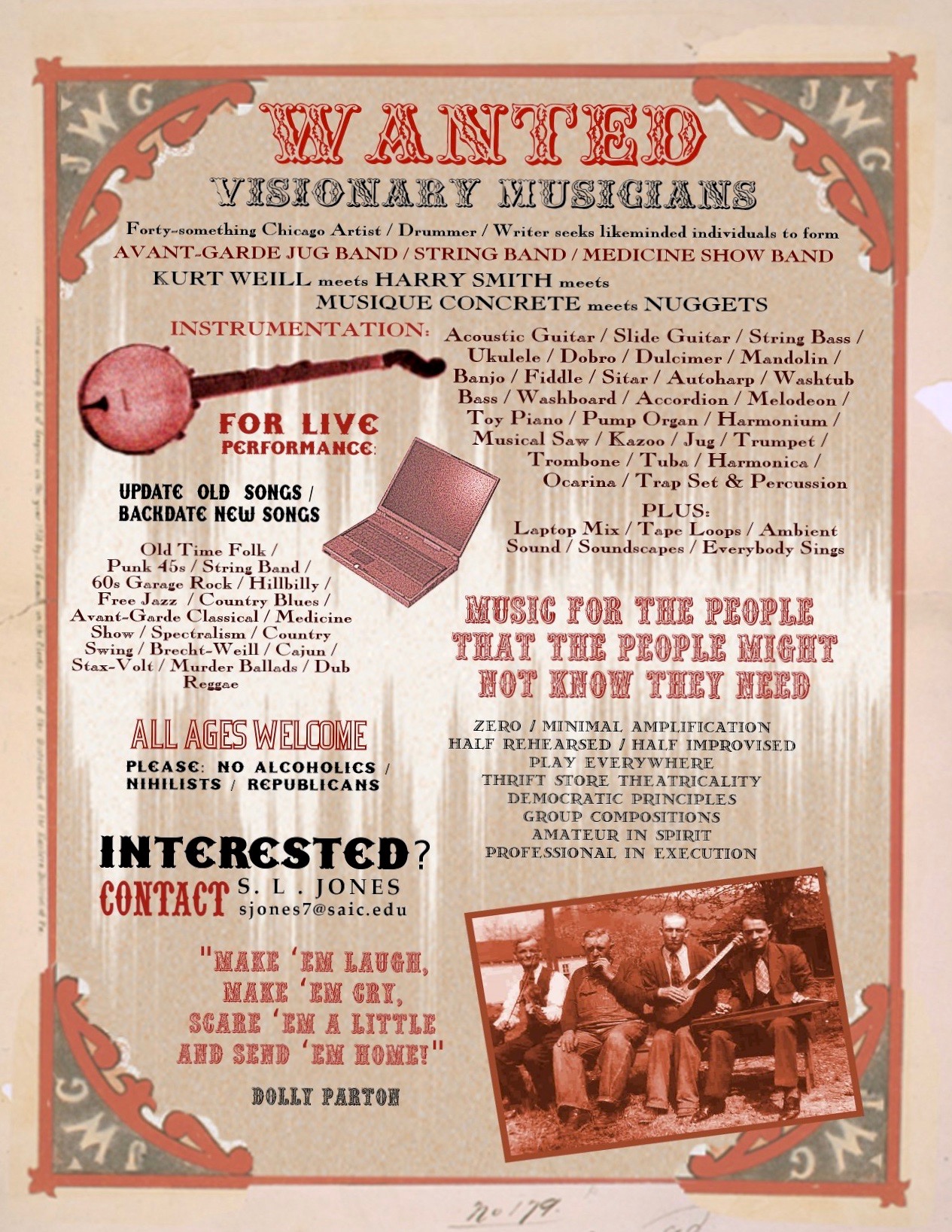