Meet Mike Abdelsayed of One Group Mind, The Comedy Clubhouse and The Titanic Players 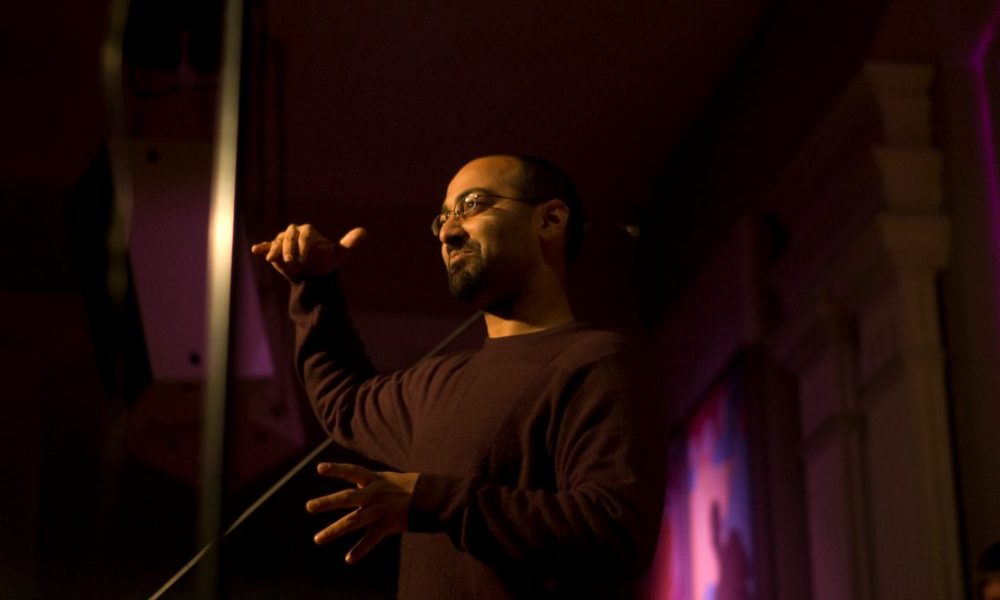 Today we’d like to introduce you to Mike Abdelsayed.

Thanks for sharing your story with us Mike. So, let’s start at the beginning and we can move on from there.
I went to Northwestern University and auditioned for an improv group on campus that produced some pretty famous people. After the audition, NBC’s Seth Meyers, a member of the group at the time, rushed outside after me and said “Listen – that was by far the best audition I’ve seen. I just ran out here to tell you that this group has never taken freshman. So, they won’t call you back. But you should really keep improvising and audition again next year.” I didn’t want to wait until next year, so I started an improv group called The Titanic Players. It eventually grew to exist on 8 different campuses with students that went on to successful television careers on many popular shows including SNL. It still exists today, and after 23 years, I still teach the oldest groups at Northwestern University.

I went to iO in Chicago and for 6 years had the pleasure of playing with people who were performers on 30 Rock and had prominent roles directing and performing with the Second City Main Stage. My coach for 4 years was Liz Allen who coached the improv ensemble in the movie Don’t Think Twice. I understudied for Keegan Michael-Key for the Second City etc stage and later participated in their Second City Outreach and Diversity Program.

We started One Group Mind to try and provide comedians with the stability required for success. In 2015, we bought the building that is now The Comedy Clubhouse, where we have performances, rehearsals and classes every night of the week.

Overall, has it been relatively smooth? If not, what were some of the struggles along the way?
As always, money is the root of many challenges. Coming from a lower income, immigrant family, there was never really a strong safety net to fall back on.

For me, I ran into a medical situation right when the doors had opened up for me at Second City. Without insurance, I had to take 3 years off for surgeries and even more time afterwards to pay for it. My personal performance career never recovered.

I empathize with the situation that all actors find themselves in: No guarantee of income, or medical benefits, and a marathon length of time to try and become one of a small group of people who are lucky enough to have their preparation meet opportunity. I was lucky enough to have had that window open, but then the opposite occurred, where I was unlucky enough to have an incident strike at an inopportune time without being able to prepare.

Alright – so let’s talk business. Tell us about One Group Mind, The Comedy Clubhouse and The Titanic Players – what should we know?
We teach comedians and improvisers and we’re damn good at it. We’re also a developing Improvisers Union.

One Group Mind is the first membership-based organization that collects monthly dues from its members in exchange for providing a growing list of benefits and safety nets. It is our mission to reduce the financial barriers to studying improvisation and to provide incentives to studying it for a long time. We are also teaching the Expansion Tree, a revolutionary way of looking at group improvised comedy and improvised situations in general.

We support professionals at The Comedy Clubhouse in Chicago’s Wicker Park and the collegiate group, The Titanic Players that exist at Northwestern University and Stetson University.

Any shoutouts? Who else deserves credit in this story – who has played a meaningful role?
There were many people that came in at critical times, it would be tough to list them all here. But every member of One Group Mind and the Titanic Players played important roles. I definitely want to thank the contributors to our Kickstarter campaign, without it, we couldn’t have purchased The Comedy Clubhouse. We have had a few Associate Artistic Directors that were of immeasurable help and I couldn’t thank them enough. I also have a special bond with everyone I have ever performed with, from my first team at iO team, Valhalla, to my current team, Tricky Mickey. But without my family, I would be nowhere. They really supported me when most people thought I was crazy. They did too, but they supported me anyway.