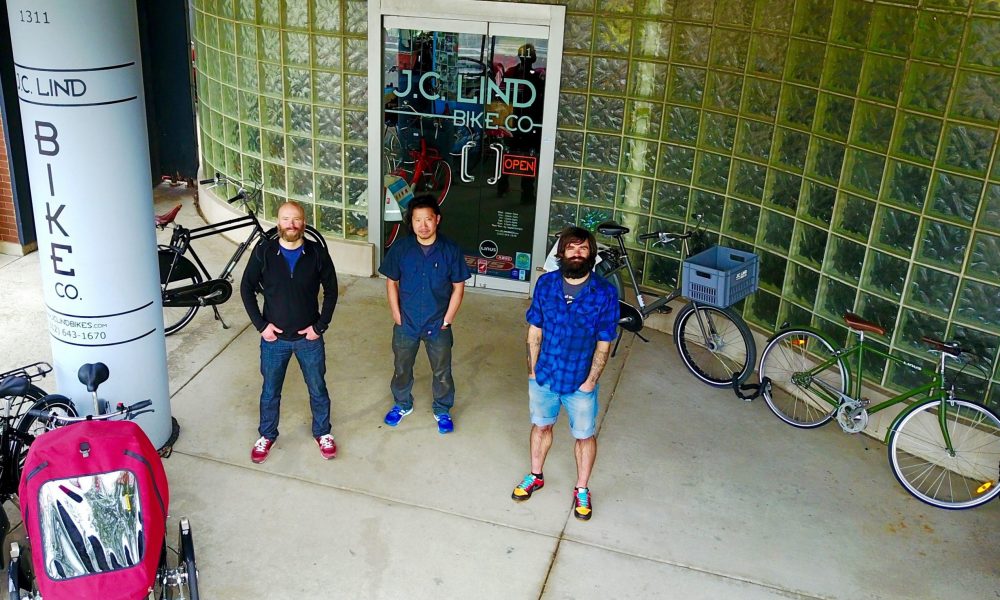 Today we’d like to introduce you to Jon Lind.

So, before we jump into specific questions about the business, why don’t you give us some details about you and your story.
The idea to start importing Dutch bikes first came to me in 2007. I got the opportunity of a lifetime when my corporate job sent me to Amsterdam for an 18 month assignment starting in the spring of 2006. While living there I fully embraced the Dutch biking lifestyle and absolutely loved using a bicycle as my primary mode of transport. After returning home to Chicago in late 2007 I started telling anyone who would listen to me about this idea I had to start selling these wild looking bikes that you could use to carry just about anything, including up to four kids. After months of planning and daydreaming about this business idea, I booked a trip to Amsterdam in early 2008 and brought my first two bikes back to Chicago as checked luggage on the return flight. At the beginning, my intention was to be a distributor importing large shipments of the bikes and establishing a nationwide dealer network that I would supply the bikes to. After realizing that I most enjoyed the interactions with the end user customers, the business shifted towards a direct to consumer approach.

I kept my 9 to 5 job in 2008 while I was getting the bike business going. That spring with my two demo bikes on hand, I would ride around Chicago marketing the bikes on weekends and evenings trying to drum up sales and create exposure. The first sale I ever made was to Kevin Womac who is the owner of Boulevard Bikes in Logan Square. He wasn’t purchasing it as a resale item for his shop, he was buying it for himself and his family. That sale was a huge confidence booster and was the shot in the arm I needed to take the next big leap which was to purchase a full container of bikes. That first big shipment of bikes arrived in July 2008 and lucky for me a group of my Dutch friends were in town and there to help unload it. After a little over a year of keeping the bikes in a local storage unit we opened our brick and mortar shop in Old Town at 1311 N. Wells Street in spring of 2009 and this space has been our home ever since.

Great, so let’s dig a little deeper into the story – has it been an easy path overall and if not, what were the challenges you’ve had to overcome?
There have been plenty of bumps in the road. We started out carrying only one brand of bike and hung our shingle with their name; they were called De Fietsfabriek (in Dutch – ‘The Bicycle Factory’; it’s about as hard to spell as it is to pronounce ‘Da Feets-Fah-Breek’). After the first two years working to get the De Fietsfabriek brand established I was heading into the spring of 2010 with some solid momentum and a good number of pre-season bike orders from customers. Then almost out of nowhere De Fietsfabriek went out of business and we suddenly lost our sole bike distribution channel. We took one on the chin and refunded all of our customers’ deposits and made the decision to carry on and search for new bike brands that aligned with our concept of Genuine Dutch Transport. It was during that summer of 2010 when I changed the shop name from De Fietsfabriek-USA to J.C. Lind Bike Co.

Please tell us about J.C. Lind Bike Co.
We sell Dutch city and cargo bikes. We jokingly refer to the bikes we sell as Heavy – Slow – Expensive. The key difference between a Dutch bike and a typical bike sold in the U.S. (hybrid, road or mountain) is the Dutch bike is designed to be used as a form of transportation, whereas the other “normal” bikes are intended as sport or recreation bikes. This is not to say you couldn’t use one of those bikes as a transportation bike, however the Dutch bike is far superior for transportation because it’s intentionally designed with features that make it a viable alternative to the car. Those features that come on the bikes we sell include internal gearing for a low maintenance, user friendly experience; fenders and chain guards so you can wear your normal clothing; racks so you can carry stuff; sturdy kickstands so you can park your bike anywhere, and integrated lights so you are always visible day and night.

We have established ourselves as Chicago’s go-to shop for young families in search of a cargo bike that they can safely transport their kids on. In stock right now we have 8 different cargo bike models from 5 different manufacturers each capable of transporting at least 2 and in some cases up to 5 kids. The cargo bikes we sell come in a variety of styles, some with two wheels, some with three, some have the kids seated in a cabin in front of the rider cockpit while others transport kids on an elongated rear rack. We even have an amazing kid+adult tandem bike where the child riders are forward of the adult and the kids are able to add some pedal power.

In addition to the family/cargo bikes we also have a wide selection of stylish city bikes perfect for commuting and bounding around the city. The city bikes we sell are mostly vintage-inspired designs with a comfortable upright riding posture and cushy wide tires, perfect for the oftentimes lumpy streets of Chicago. We are not shy about stocking extra small and extra-large frame sizes, with bikes available that can accommodate riders from approximately 4’10” to 7′ tall.

We take pride in our zero pressure sales approach and we like to take as much time as necessary with our customers to ensure the bike they choose is the right one for them and their lifestyle. We do not try and stick square pegs into round holes, which is to say we are not afraid to recommend other bikes and/or other bike shops when appropriate.

Do you look back particularly fondly on any memories from childhood?
Growing up in Oak Park, I have a lot of fond memories of long summer days when we would spend the entire day outside playing sports, skateboarding and riding bikes around the neighborhood.