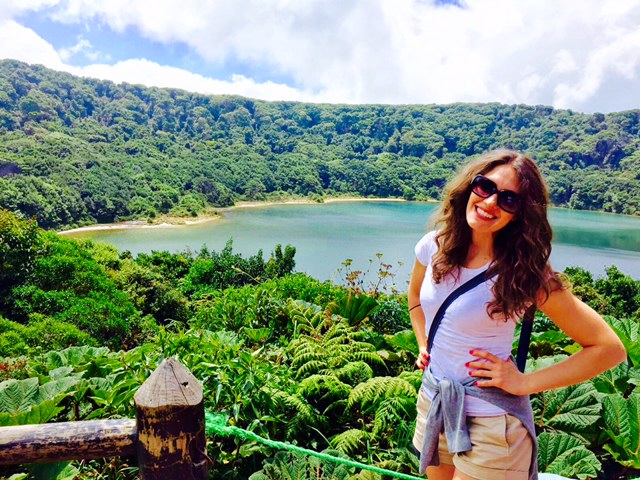 Today we’d like to introduce you to Dina Bach.

Dina Bach’s fingers first graced the keys of the family piano at the age of 10, and her love of music and ear for composition began to flourish immediately. In 2017, after years of working to make time for her music around life’s other obligations, Dina left her job as a high school Spanish teacher to pursue music full time. As a singer, songwriter, and pianist, Dina focuses on pop and country-pop where her warm vocals and playfully evocative lyrics entertain listeners and audiences alike. Her musical influences range from Sara Bareilles and Norah Jones to Carol King and Frank Sinatra.

When Dina began performing in the larger Chicago area, she quickly built a dedicated fan base. Currently, she performs solo throughout the Midwest and has played at some of Chicago’s hottest venues, including House of Blues Foundation Room, Joe’s Bar, Elbo Room, and Uncommon Ground. Dina also donates her time and voice to charity by performing at events such as the Autism Speaks Walk (Soldier Field, Chicago) and the Expressions Gala (Artspace 8, Chicago) in support of Autism Speaks.

In addition to solo shows, Dina routinely collaborates and shares the stage with various musicians. She opened for British singer/songwriter Callaghan, hosted a singer/songwriter showcase at Ballydoyle Pub (Downers Grove, IL), and has performed and written with two-time Grammy Award Nominee, Dave Rave. Together, Dina and Dave plan to release an album of original compositions in late 2017.

Dina’s most recent release – her 2016 EP Kiss Me Like That – was made possible by the support of her fans through PledgeMusic. The album’s closing track, “Summertime,” was featured in Chicago Music Magazine’s local pulse for hot new music and Dina was invited to Chicago’s WGN Radio where she was interviewed by Mike Stephen and performed four original songs in the famous Michigan Avenue studio.

In late 2016, Dina started a songwriting challenge that requires her to write and release an original song every week for one year. She seeks inspiration and ideas from fans on social media and at shows, writes fresh lyrics, and records a video for weekly release on, “Music Monday.” In addition to fostering creativity, this challenge provides her with an opportunity to connect with fans.

We’re always bombarded by how great it is to pursue your passion, etc – but we’ve spoken with enough people to know that it’s not always easy. Overall, would you say things have been easy for you?
When I first began writing my own music, I struggled with sharing it publicly. Music is such a personal pursuit for me and sharing these stories – not to mention actually performing in front of people – was terrifying. This fear prevented me from pursuing music for a number of years until I wrote a song following the tragic shooting at Northern Illinois University. The response to that song was very positive and helped me overcome some of my initial fears. I began to play out more following that release and gradually learned to be more confident on stage and in my writing.

So, as you know, we’re impressed with Dina Bach Music – tell our readers more, for example what you’re most proud of as a company and what sets you apart from others.
I am a singer/songwriter. I write and release pop music and also write custom wedding songs. This year, I am challenging myself to write a song a week and I’m currently on week 33. I write and release a new song every Monday (Music Monday) to share with my online community of fans. I’m proud of this project because it keeps me accountable to my fans and forces me to create and develop as a writer.

So, what’s next? Any big plans?
I’m going to Nashville in August to participate in an independent singer/songwriter conference that focuses heavily on the business side of music. I will also be launching a Patreon campaign in support of my New Music Monday song releases in which I write, record, and release a new song every Monday. Overall, the focus for the next 12 months will be building my personal brand and image, writing and recording new music, and pursuing larger venues for future shows. Upcoming shows include a headline performance at the Acorn Theater in Three Oaks, Michigan and a show at The House of Blues Chicago.