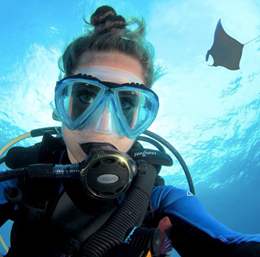 Today we’d like to introduce you to Alex Rose.

Alex – please tell us about how this story starts.  Have you always been interested in ocean conservation?  How did you end up starting Blue Ring?
I have always been enchanted by the ocean, even as a little kid. I’m from the western suburbs of Chicago so I obviously didn’t grow up near the ocean, but I did have the Shedd Aquarium. Some of my first memories are from there. It’s an incredible place and I volunteer scuba dive there now. As I got older, I was heavily influenced by Dr. Sylvia Earle, and I still am. Dr. Earle is an oceanographer, explorer, author and lecturer who has led more than 50 expeditions and easily clocked over 7,000 hours underwater. She served as Chief Scientist of the National Oceanographic and Atmospheric Administration (NOAA) in the early 1990s, and was named Time Magazine’s first “Hero for the Planet”. I attended a lecture of hers at Shedd when I was ten and I was officially hooked on the ocean. Twenty years later I work as the Science Editor for Ocean Geographic magazine and just founded a company called Blue Ring to create a new method of ocean conservation accessible to and inclusive of everyone who wants to better understand and protect our seas.

So a bit about Blue Ring. It is a Benefit Corporation that will allow people to “marry” the ocean. Instead of using “marry” with the conventional spelling, it will instead be spelled “mery” because of its correlation with the root word “mer” meaning “sea”. Mery™ is a trademarked word that will be closely used and associated with the Blue Ring brand to denote ones ongoing and committed relationship with the ocean. Participation will cost $25 and this will get you a digital “Meriage Certificate” along with a blue silicone ring to show off your commitment. For $10, people under the age of 18 can be “adopted” by the ocean and become “children of the sea”. They will receive a pendant instead of a ring. Each year, the money raised will go towards funding a different ocean initiative in its entirety. The first goal is to raise $5 million for two 1000-meter, dual-classed submersibles built by Deep Ocean Exploration and Research (DOER). This will require 200,000 people to mery™ the ocean.

I thoroughly enjoy the writing, traveling, and underwater photography I get to do with Ocean Geographic and look forward to many more years with the magazine, but I have wanted to do something big for a while now but just couldn’t figure out exactly what it was. Then last year sometime I had a random idea. I tried to start a personal FB page for “The Ocean” so that I, Alex Rose, could put myself “In a relationship” with The Ocean on social media, since I thought that would be the most accurate way to reflect my relationship status. Needless to say, FB wouldn’t let me do it because “The” and “Ocean” aren’t considered real names. So I settled for a public figure page of the same name. Skip to October 2016 right after finishing a keynote presentation at Blue Ocean Film Festival in Florida. A woman came up to me after the talk having been emotionally moved by the imagery I had showed from the Arctic and said: “If I ever get married that’s where I would want to do it. But I don’t want to marry a person, I want to marry the ocean!” And it suddenly clicked. My first true light bulb moment. In five seconds I saw the next five years happen and before I even said it out loud I already knew what I had to do. Other people apparently felt the same way I did about the ocean, and probably a lot of other people, and I could use that sentiment to catalyze some serious change in the world.

What’s been the impact of Blue Ring so far and what are you hoping to achieve over the next year?  What about longer term?
Blue Ring just launched on June 8th, World Ocean Day and I have some giant goals for my first year. As I mentioned, my first mission is to raise $5 million to build two submarines, but you might be wondering why the subs are so important. Consider something. When we think of the ocean, the images that usually come to mind first are those of sunlit reefs filled with healthy corals and plentiful, vibrant fishes swimming in brilliantly blue, tropical waters. Ecosystems like this actually make up less than 1% of the Earth’s surface and under 2% of the ocean floor. The vast majority of the ocean exists beneath the depths where sunlight penetrates. It is unknown to us, and what we do not know we cannot understand, and are even less likely to protect. The creation and operation of two submarines capable of descending to 1000 meters will shed light on the endless mysteries and discoveries hidden in the darkest recesses of our alien deep sea. The sustained health of our world’s waters and the future of every living being on planet Ocean depends on our ability to understand the processes occurring in and creatures inhabiting the deep sea. These submersibles will exist for the sole purpose of ocean exploration and care with no ulterior motives or financial incentives driving their use. They will be symbols of hope, dedicated to exploring and documenting places never before witnessed, as well as bringing to the public’s attention news and evidence of human impacts.

Every year Blue Ring will fund a different ocean conservation initiative. There are so many innovative and inspirational projects out there, but many of them are in serious need of funding, and I aim to change that.

Any shout outs? Who else deserves credit in your story / the Blue Ring story?
None of what I do would be possible without the unwavering support of my parents. Dr. Earle of course has been a lifelong inspiration to me and she is my greatest mentor and hero. Ocean activist, underwater photographer extraordinaire, and fellow Chicagoan Lynn Funkhouser is the reason I took a camera into the sea. My boss at Ocean Geographic magazine, Michael AW, has afforded me countless opportunities to see the world and work on a professional level with some of the most respected names in the world of ocean conservation. But a complete stranger was the person who spoke the words that sparked my idea for Blue Ring. My now friend Nina Pardo of Conservation International Peru said she wanted to “marry the ocean” and that little phrase triggered my idea for this company that will hopefully help change the way we approach marine conservation. The ocean may already cover three-fourths of our planet, but it’s time for us to put it on the map, and I plan to do just that with Blue Ring.