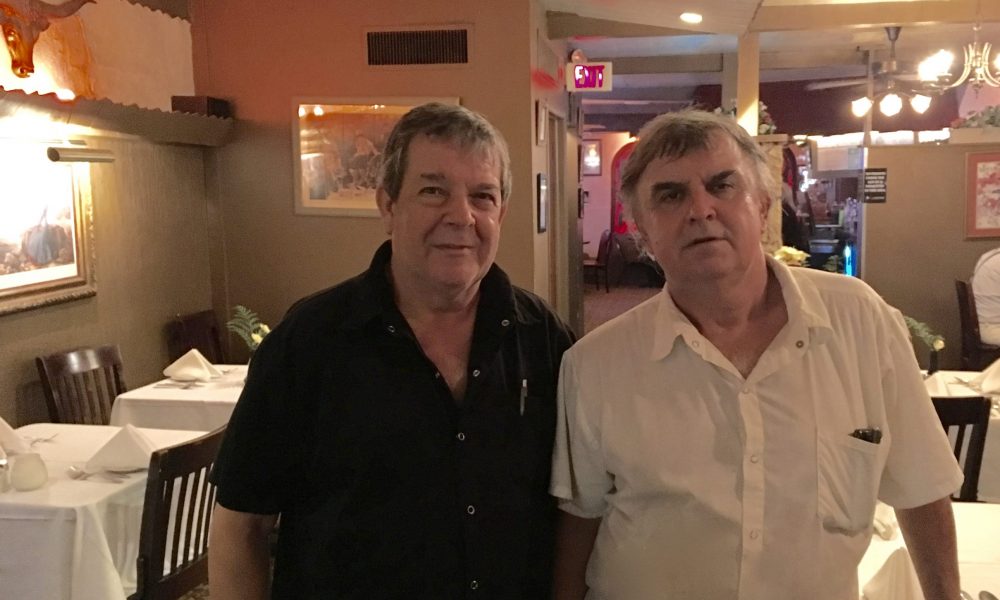 Today we’d like to introduce you to Kiriakos and Gus Tzouras.

Kiriakos and Gus, please share your story with us. How did you get to where you are today?
Kiriakos: I came to the United States in February 1978 and started working at the Fountain Blue Restaurant and Banquets in Des Plaines, IL. My cousin Gus helped me get the job. My first job was to make salads and then I slowly made my way up through the kitchen staff. I worked at other restaurants in the kitchen before I came back to Fountain Blue to become head chef and oversee the kitchen staff. In 1997, along with Gus’ brother Kiriakos, we made the decision to buy our own restaurant. We came to Golden Steer Steakhouse in June 1997 and have been here since.

Gus: My story is similar. I came to the United States in the mid-1970s and started bussing tables. Eventually I made my way to Fountain Blue and helped Kiriakos get his job. I was a chef and learned a lot. From there I went and worked at the Black Ram Restaurant in Des Plaines and eventually made my way to Noble House Restaurant in Palatine, IL where I worked for nearly 20 years. After my brother and Kiriakos bought the Golden Steer Steakhouse, I came to work with them. After my brother passed away in 2011, I took over his share and we’ve been partners since.

Kiriakos: Kiriakos, Gus, and I are cousins but grew up as brothers so we’ve been together since we were kids and becoming partners in the restaurant was a natural move for us.

Overall, has it been relatively smooth? If not, what were some of the struggles along the way?
Kiriakos: Nothing is smooth. We have had a lot of up and downs in our careers. Before coming to the Golden Steer, I had opened a fast food restaurant that eventually did not work out the way I had hoped. So I returned to the style of cooking I knew, American Continental, and it eventually led me to Golden Steer. Even at the Golden Steer we have had struggles, the economic crisis in 2008-2009 was difficult but we managed to get through it. We persevered and it paid off as we were recognized locally through various publications and restaurant TV shows.

Gus: Similarly, I tried opening my own fast food place but it did not go the way I thought. I took those experiences and have applied them to my situation today which has made me a better chef and owner.

Please tell us about Golden Steer Steakhouse.
Kiriakos: We are your traditional American Steakhouse. The Golden Steer Steakhouse was started in 1969 by the Vlahos Brothers. We bought the place in 1997 from Taki Vlahos, and what we learned right away was that the place had a long standing clientele. We did not change anything to the menu or to the decor. Over time we add items to enhance but never to detract. We specialize in steaks, chops, seafood, and French Onion Soup. What makes me proud of the Golden Steer is that our clientele feels at home when they are here. I am proud of my staff. The majority of them have been with us since the beginning and have stayed with us. The thing that sets us apart from other steakhouses is that you receive soup, salad, entree, and a side all for one affordable price. That is a rare commodity in today’s restaurant scene. We use high quality ingredients and pride ourselves on our service.

If you had to go back in time and start over, would you have done anything differently?
Gus: You are constantly learning. Things do not always work out the way you plan. The key is to not let it get you down and just keep going. Being in the business for over 35 years you see many things, trying to find the balance is key.

Kiriakos: I learned many things throughout the years from observing my bosses and how they went about things. A key thing I learned is that if you see things are working, do not change it. People think great change is always a good thing. Subtle changes are good but when you overhaul completely from what your customers know, you are bound to lose them and fail.